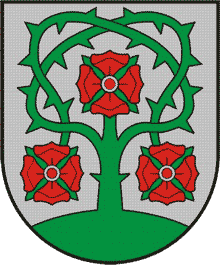 Domeikava is the largest settlement in Lithuania with a village status. It is situated in the ridge of the right bank of the river Neris, which is 70-80 meters above the sea level. The name of the settlement derives from a noble Domeika family that once lived here.

In the east the coasts of its land are flashed by the waters of the river Neris, in the south a territory of the eldership borders Vilnius-Kaunas-Klaipėda highway, in the west – Varluva-Babtai and Veiveriškiai forests, and in the north – the lands of Lapės eldership. The area of the territory – 5,787.5 ha. According to the data of 2015, more than 8 thousand people reside in the eldership.

The settlement grew rapidly after the Machines Testing Station, that affiliated to the union, and auxiliary facilities were established in Domeikava during the Soviet era. As a result, in 1979 it became the centre of eldership.

Lantainiai Mound of impressive dimensions is situated in the territory of Domeikava Eldership. This mound is a monument to the historical past of this region and an ornament of the landscape. In 1972, it was listed on the lists of cultural property. The mound is surrounded by ravines of considerable size on three sides. According to the older local people of Domeikava, during the Tsarist era a tavern stood near the mound. There is also a legend that tells about a pagan shrine that stood in the ancient time on the mound, and about a very deep cavity at its peak.

A flat Kabulkos grave field, which is another archaeological monument, also echoes of the past of Domeikava. According to archaeologists, people were buried in this place in the 5th-6th centuries.

The underground printing house “ab“, which was established in Domeikava, is reminiscent of more recent past. This hub of illegal printing, that during the Soviet era was established by two patriots Vytautas Andziulis and Juozas Bacevičius, operated undetected for 10 years in Saliai village. From 1981 until the times of national revival, a free Lithuanian word spread from this catacomb printing house.

Today this printing house is a subdivision of Vytautas the Great War Museum. Here, anyone who wants to can get to know the history.

Prepared according to the book “Decades in the Area around Kaunas” (“Pakaunės dešimtmečiai“) (compiled by Petras Garnys).