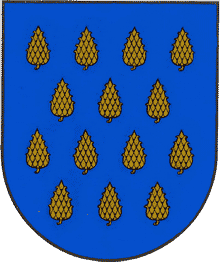 16 km west of Kaunas, on the left bank of the river Nemunas, a large and beautiful pine forest is situated. The houses standing on its northern outskirts, closer to the river Nemunas that flows past the place, form a long chain. Some of them are hiding deep in a cosy pine tree forest. This is Kačerginė.

Kačerginė as a summer resort started growing at the beginning of the 20th century. In 1933, the place name of Kačerginė was legally validated, the place was granted an official status of resort. The popularity of the place was determined by its convenient geographical location and excellent nature – sandy shores of the river Nemunas, a wonderful pine forest.

On 16 May 1997, by the Resolution No 486 of the Government of the Republic of Lithuania, Kačerginė was granted a town status.

On 12 August 1999, by the Decree No 556 signed by the President Valdas Adamkus the Coat of Arms of the town was approved – 4 gold cones arranged in horizontal lines and depicted in blue field (created by an artist Arvydas Každailis).

The organisations and establishments that operate in the eldership: a multifunctional centre in which pre-school and pre-primary education is organised, a cultural centre, a primary school, and an outpatient clinic.

The events and feasts of the town take place in the multifunctional centre, the residents have the opportunity to engage in sports - to play table tennis, to attend exercise classes, engage in line dancing.

The organisations and establishments that operate in the eldership: post office, two stores, cafe-bar “Kačerga“, a three-star hotel “Kankorėžis“. Kačerginė children sanatorium “Žibutė“, the affiliate of the Public Institution Republican Hospital of Kaunas, where the 1st in Lithuania School of Healthy Lifestyle for people with Diabetes and Obesity was founded, operates in Kačerginė.

In 1998, the Saint Ann chapel was built according to a project of an architect V. Landsbergis-Žemkalnis. Kačerginė is proud to have two renovated heritage buildings of wooden architecture: the villa of Reklaitis that currently houses the office of the town eldership, and the villa of P. Vaičiuška.

Non-profit organizations operate in the eldership: Kačerginė Community Centre, Kačerginė community “Vizija”, the society of the nurturers of the legacy of Pranas Mašiotas and Jonas Mašiotas.

Centralized water supply and sewerage networks are built, a pontoon pier, bicycle paths, that stretch all the way to Kaunas city, are equipped in the town. Kačerginė park was renovated. A playground for children is equipped in the park, cultural events take place here.

We are happy to have a “Trail of Springs” – a 6 km long Nordic walking route on the naturally made out by feet forest footpaths. The track, that has thousands of fans, stretches through the most picturesque viewpoints of the pine forest to Pypliai Mound on the slope of the river Nemunas. This place overlooks great views of a valley of the river Nemunas and its tributary Nevėžis.

The Sculpture Park, which is based on Pranas Mašiotas fairy-tale characters, provides a pleasant opportunity to remember your childhood. Poetry is read every spring in the sculptural benches forest park which is dedicated to the memory of V. Mykolaitis-Putinas.

The tired ones will be refreshed by waters of the spring which on the eastern side is surrounded by J. Biliūnas square, while the hungry travellers can have a delicious and quality meal in “Kačerga“ cafe or may barbeque their own steak in the nearby “Apuokynė“ and “Barsukynė“ camping sites. Lovers of active recreation in nature will be happy to fish in the river Nemunas, to pick berries and mushrooms, to rent bicycles or kayaks, and to have fun skiing in the beautiful pine forest in winter.