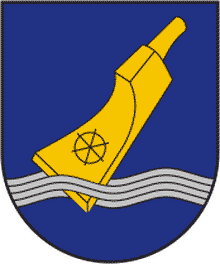 Kulautuva is one of the most beautiful settlements in Kaunas District. It is situated on the right bank of the river Nemunas, 23 km west of Kaunas city. The distance from Kaunas to Kulautuva travelled by boat by the river Nemunas, that carelessly wriggles between the banks, is only 18 kilometres. The town is situated in the picturesque valley of the river Nemunas. The lush pine forest, that soothes everyone with slumberous sounds of the breeze in the pine trees, emits fresh air that is rich in ozone and smells of pine resin, protects it from the fierce north and northeast winds.

Kulautuva settlement is known since 1364. In 1986, two ancient settlements, two grave fields, and the place of burning rites were found in the field adjoining the river Nemunas and Klevinė stream. Five jewellery treasures of the 14th century, that were hidden in the face of fatal danger or sacrificed to the gods, were found. At the beginning of the 20th century, the town has become a summer resort. During the interwar period, it was one of the most popular places to rest, one of the most beautiful resorts. It is said that a walk around the town alone was a great pleasure. The carefully maintained alley of the President A. Smetona was planted with young trees, its edges were paved with green turf that seemed as if it was a carpet. Gorgeous villas were standing on both sides of the alley. Nearly each of them was decorated with flower beds and various playgrounds. The crossing streets were also beautifully landscaped. Like the alley, they were decorated with flowers, trees and summerhouses.

The community of the town has long been trying to recover name of resort. Here, after a long break, the song and dance festivals of the district are organized again. For more than 15 years now, the singing poetry festival Acacia Alley, which attracts much attention, has been organized.

And the locals managed to achieve their goal! In fact, Kulautuva has not yet been granted the status of resort. However, like Zapyškis and Kačerginė, it is recognized as a Lithuanian resort area.

Today the town is waking up from stagnation. The steadily growing population of the town (according to data as of 1 January 2017, 1,537 people live in Kulautuva) and Kulautuva Hospital of Rehabilitation (the Affiliate of the Hospital of Lithuanian University of Health Sciences Kauno Klinikos), contribute to its viability. The hospital has modern offices and employs qualified professionals (for patients with circulatory and nervous system diseases).

The town can now be visited not only by bus or car. It can also be reached by cycling on the newly equipped bicycle path that stretches from the outskirts of Kaunas (Šilelis village). After arriving, visitors can spend their time in a healthy and active way in the park and in the recreation areas, in the Valley of Gods and Goddesses, the wellness track. And do not forget to visit the memorable monuments that are of great importance for Lithuania. This year, a wakeboard park will be opened on the beach favoured by summer vacationers

Prepared according the book “Decades in the Area around Kaunas” (“Pakaunės dešimtmečiai“) (compiled by Petras Garnys).