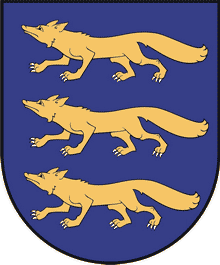 Lapės is an old middle Lithuanian settlement in Kaunas District. Archaeological findings in Vanageliai village, in the valley near the river Neris, testify to the fact that people lived here in the 4th-5th centuries A. D. Later the settlement was moved on the bank of the river Neris, where Lapės Manor was founded, the castle palace and church were built.

Lapės Manor is known since 1591. Over the centuries, the owners of Lapės Manor changed. From 21 November 1939 to 15 June 1940 the manor was owned by Antanas Merkys. Lapės Manor became the summer residence of the Prime Minister. The President of the Republic of Lithuania Antanas Smetona and other senior officials from abroad often visited this place.

The memory of Antanas Merkys is perpetuated in Lapės: the main street is named in the honour of Antanas Merkys, and in 1991 a memorial bust of A. Merkys was erected (the author of the bust is G. Jonkus).

On 21 January 1919, Lapės Volost was founded with its administrative building in Lantainiai village. Later the volost administration was set in Lapės. During the period from 1950 to 1975, Lapės was the centre of the neighbourhood, and in 1975 Lapės neighbourhood was merged with Domeikava neighbourhood. On 15 July 1997, Lapės Eldership was restored.

The St. John Baptist Church in Lapės was built in 1620. It stands on the high cliff of the river Neris. The church is single-towered, has features of Renaissance architecture, is rectangular is shape, built of bricks, only the upper stage of the tower is wooden. In 1899, the church was renovated and enlarged. It was later decorated with stained-glass windows depicting St. Casimir and St. Joseph. In 1988, the stained-glass windows were restored.

Today Lapės is one of the most attractive places to live. The picturesque valleys of the river Neris, refreshing pine tree forests, convenient access with the city, good roads, developed infrastructure – all these conveniences make Lapės Eldership attractive both to investors and residents. New residential quarters are being built here, and new settlements are planned. So, despite emigration that reduces the population of Lithuania, the population of the eldership is growing steadily – on average of 300 new residents per year. On 1 January 2017, 3,686 people declared their place of residence here. However, this is not the actual population - it is much larger, and is estimated to exceed 5 thousand. There are as many as 38 societies of allotment gardens with more than 4,700 parcels in this eldership. People reside permanently in the houses built in some of them, but in most cases they declare their place of residence in Kaunas city.

Lapės town with the population of more than 1,300 people is in the territory of the eldership. Lapės Lower Education School, that was built in 2004 according to original, modern design, is located in Lapės town. Not far it is a nursery school. Lapės post office, 2 stores, veterinary pharmacy, family health centre, and retirement home also operate in the town. The eldership covers an area of 5,671.71 hectares. There are 15 villages in its territory. The largest are Drąsekiai (577 residents) and Šatijai (513 residents) villages.

Prepared according the book “Decades in the Area around Kaunas” (“Pakaunės dešimtmečiai“) (compiled by Petras Garnys).